Norman Leach has sent me an announcement for an upcoming presentation he will be giving:

The Winnipeg Press Club is proud to host a luncheon featuring our Ambassador at Large, author of best-seller Passchendaele: Canada’s Tragedy and Triumph on the Fields of Flanders, and a historian on the Paul Gross movie by the same name.

Join us for lunch and a lively discussion on the art of military storytelling.

When: Monday, September 19, 2011 at 12:00 noon
Where: Games Room, Royal Canadian Legion #4, 1755 Portage Avenue., Wpg.
Cost: $25, including taxes $20 for members of the Winnipeg Press Club and St. James Legion #4 and students – including taxes
Advance reservations are required by September 9.

To reserve your space and buy tickets:
go on-line to www.winnipegpressclub.com and click on the “events” tab
by email at winnipegpressclub@mts.net
by phone, call Wendy Hart at 204-800-1887

Note that the Legion #4 has a cash bar. It does not accept debit or credit cards.

About Norm Leach: Norm Leach brings Canadian military history vividly to life through his books, documentaries and presentations. Not for him the stodgy and dull recitation of battles won and lost and too many dates to memorize.

Norm is a historian, award-winning writer, documentary producer, professional speaker and adventurer. He has written five books on Canada’s military history. His latest is Sam Steele: A Canadian Hero. He’s currently working on a documentary on Steele.
Posted by Ken at 9/06/2011 09:24:00 p.m. No comments:

Unveiling at The Military Museums in Calgary

I received the following item from Norman Leach in Calgary:

The Military Museums (TMM) will unveil a World Trade Center artefact on the 10th anniversary of this tragic date in world history. The 1,277 kilogram piece of exterior wall steel was graciously gifted to TMM by the Port Authority of New York and New Jersey. All members of the public are welcome to attend this outdoor event.

The ceremony will include several distinguished speakers as well as conceptual sketches and a site model from Averns. Averns will continue to work with TMM's Art Gallery Advisory Council to propose a public installation through which viewers can engage and reflect. The final installation of the World Trade Center artefact will represent a link to The Founders' Gallery, a 4,000 square-foot gallery that hosts local, national and international art and heritage exhibitions at TMM.

Admission to TMM is free on Sunday, 11 September 2011. Attendees should dress comfortably for this outdoor event. TMM sincerely appreciates the donation of a non-perishable food product in support of the Veterans Food Bank and or a monetary donation to support our mission elements - to remember, to preserve and to educate."
Posted by Ken at 9/06/2011 09:19:00 p.m. No comments:

The website for the University of Toronto Press has a "Canadian History" category some 43 pages in length, and I looked to see what lies therein with respect to Canadian military history:

David Bercuson, Blood on the Hills: The Canadian Army in the Korean War (published Apr 2002);

Terry Copp, Fields of Fire: The Canadians in Normandy (Jul 2004);

Ian Miller, Our Glory and Our Grief: Torontonians and the Great War (Mar 2002)

Robert Teigrob, Warming Up to the Cold War: Canada and the United States' Coalition of the Willing, from Hiroshima to Korea (May 2009);

Brian Tennyson and Roger Sarty, Guardian of the Gulf: Sydney, Cape Breton, and the Atlantic Wars (May 2002);

plus several more published more than a decade ago.

I was away from home with my family last weekend, so didn't have a chance to blog. So, here is a collection of material I've gathered.

Fort Malden, in Amherstburg. Ontario, had its Military Heritage Days last weekend (we were there), and there's some material on The Amherstburg Echo website. It was pretty interesting, especially for my seven-year-old daughter - who lined up with the mini militia - and my wife (who worked there as a guide about 20 years ago).

RUSI (Royal United Service Institute) Vancouver has run a piece on the Canadian Military Education Centre Museum, which is located in the old CFB Chilliwack. This is "a living history museum that purposefully educates Canadian students, teachers and the public about Canadian military history. CMEC allows people to touch, feel and experience Canada's military history through hands-on interactive displays." The core of the museum revolves around military vehicles and it is open on Fridays, Saturdays and Sundays from 1000 to 1600 hours.

The Military Collectors' Club of Canada website recently came across my line of sight as a group dedicated to serving "as the focal point for Canadian Collectors of all types of military artifacts from medals, badges, artwork, to Military arms, vehicles and just about anything Militaria related." I've personally found in the past that such groups are incredible fonts of knowledge whose members are very willing to answer questions the historical researcher might have about particular areas of Canadian military heritage.
Posted by Ken at 8/02/2011 06:37:00 p.m. No comments:

Online Review of "A Bard of Wolfe's Army"

Timothy Compeau, with the Department of History at the University of Western Ontario, has written a review of Ian M. McCulloch and Earl John Chapman (eds.), A Bard of Wolfe's Army: James Thompson, Gentleman Volunteer, 1733-1830 (Montreal, 2010), for the H-Canada listserv. Thompson was a member of the Fraser Highlanders present for the assault of Quebec City in 1759 and for the same city's defence in 1775.
Posted by Ken at 7/27/2011 08:57:00 p.m. No comments:

Upcoming Conference on the First World War at UWO 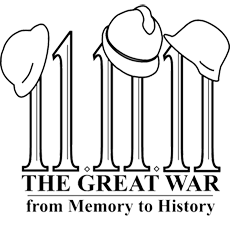 The University of Western Ontario will be hosting an inter-disciplinary conference from 10 to 12 November 2011 titled The Great War from Memory to History. The tentative program for the conference is up and includes a wide range of papers in several categories, such as education, Aboriginal Canadians, war art and cinema, memory, narratives, ethnic background, remembrances, memorials, and literature. There will also be participation in the London, Ontario, municipal Remembrance Day service.
Posted by Ken at 7/24/2011 08:56:00 p.m. No comments:

I recently discovered a project website for the Lijssenthoek Military Cemetery, in Poperinge, Belgium. Titled "Daily reflections of the Great War", the research project "aims to bring into focus the story of the medical assistance behind the front line and to explain how the place provides a mirror of the whole of the Great War." The project managers are also appealing to anyone with information on the dead who are interred there to contact them. One of the interesting benefits of this website is the inclusion of a search function which allows the visitor to search through information available on the men buried in this Commonwealth War Graves Cemetery. While much of the information can be gleaned off of the attestation papers available on the Library and Archives Canada website, there are also images - including (so it appears) the headstone for each man.
Posted by Ken at 7/19/2011 06:54:00 p.m. No comments:

I can't remember exactly what I was looking for - probably links to stories about Carpiquet - but earlier this month I stumbled across the CBC Digital Archives website, specifically for the "On This Day" material for 4 July. In this case, the highlighted piece is a five-minute radio clio from Matthew Halton recorded during the launch of the Canadian assault on the German positions at Carpiquet Airfield on 4 July 1944. Listed on the same page are links to radio pieces about Buzz Beurling and V-E Day celebrations in Canada. Amongst several search categories is "War and Conflict", the overarching category containing some 809 radio and television pieces. Some are contemporary to the subject, others remembrances by veterans and others. Deeper examination would clearly produce other very interesting items to students of Canadian military history.
Posted by Ken at 7/17/2011 09:28:00 p.m. No comments:

The website of the Digital Book Index provides a list of links to more than 140,000 free "full-text digital books from more than 1800 commercial and non-commercial publishers, universities, and various private sites." The visitor can browse by subjects or search by author or title. Canadian content under the category of military history - World War I - personal narratives and diaries, for example, includes amongst the offerings: Frederick Bell's "The First Canadians in France", Ralph W. Bell's "Canada in War-Paint", Sapper W. Brindle's "France & Flanders: Four Years Experience Told in Poem & Story", Frank Carrel's "Impressions of War", H.D. Clark's "Extracts from the War Diary and Official Records of the 2nd Canadian Divisional Ammunition Column", Frederic Curry's "From the St. Lawrence to the Yser with the 1st Canadian Brigade", etc., etc. Each publication links to a page of the Internet Archive or other sources, the former providing electronic files in various formats - such as PDF, EPUB, Kindle, or even the option to read it online.
Posted by Ken at 7/15/2011 08:16:00 p.m. No comments:

Ken
Ottawa, Ontario, Canada
Just a Canadian military historian trying to make his way through the twists and turns of his craft.

Blogroll and Other Links

This work is licensed under a Creative Commons Attribution-No Derivative Works 2.5 Canada License. Any material quoted in this blog is obviously not copyrighted by the author of this blog.